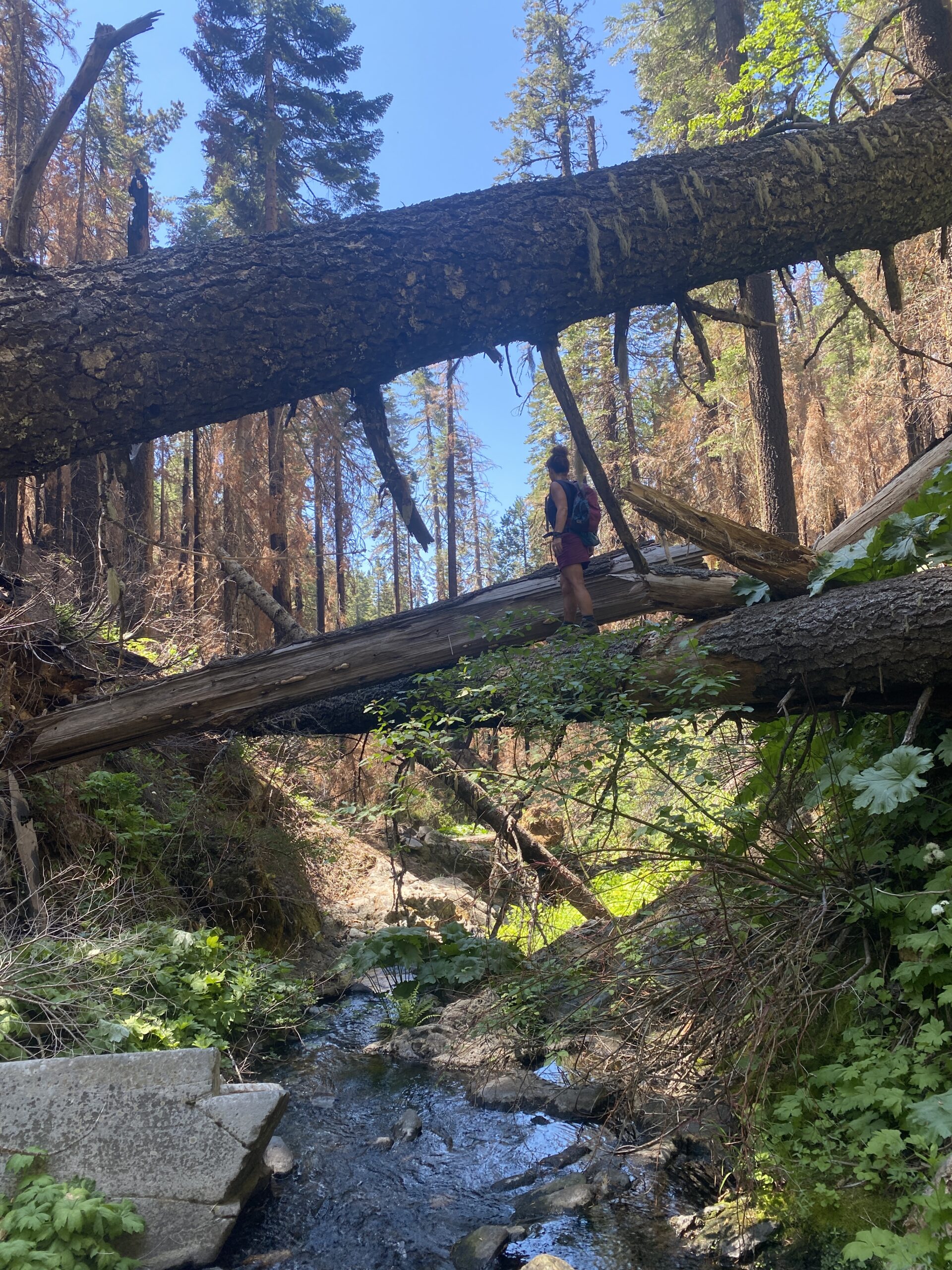 The place is massive, deep, and burned. Our path felt endless. In retrospect, looking back over the course of a long, fruitful, sometimes difficult year full of personal and societal change, a fellow traveler on this excursion recently remarked: “the forest meets us where we are.” In this case, that forest was the Marble Creek watershed, the largest tributary of the Little North Fork of the Middle Fork, which is itself among the largest tributaries of the Middle Fork of the Feather River. The Little North Fork is an eligible Wild and Scenic River but Marble Creek is not; neither of them, along any of their reaches, is protected. They remain scorched and vulnerable. Though it’s become a familiar refrain, after successive years of catastrophic megafire and global pandemic, we could just as well be describing ourselves.

Marble Creek winds in and out of public and private holdings between the Walker Plains and Rock Island Ridge. The canyon it forms yawns spectacularly when you catch your first glimpse of it. Some maps show a trail that runs almost its entire length from the headwaters below Soapstone Hill near the Oroville-Quincy Highway to its confluence with the Little North Fork, but there really is no trail. We found that out. But the fantasy that there might be a trail fortified our optimism, propelling us even after we’d stopped believing. We finally chose the more fanciful route in the creek itself, walking along enormous logs, through pockets of wildflowers, and under vast tunnels of the tallest Indian rhubarb we’d ever encountered. It took members and friends of Friends of Plumas Wilderness over eleven hours to hike five miles that day, nearly one year ago. They were beautiful, arduous, complex miles, and they filled us with delight.

Scott Lawson gave it a “difficult” rating and described it as a “pretty, but unmaintained trail” in his comprehensive Trails of the Feather River and Yuba River Region back in 2004 (142). When we hiked it on July 5th last year, it had been among the 319,000 acres burned by the North Complex Fire. We were in the midst of the uncertainty of COVID and the landscape offered a demanding trek to match the times. While one group member’s field notes remark that near the top the forest was “easily traveled due to the near-complete combustion of most trees and shrubs in our viewshed,” and “burned-out pines and firs towered above us in varying shades of blacks and browns,” they also recorded, “ebullient observations abounded of California hazelnut (Corylus cornuta, ssp. californica) stumpsprouting everywhere and some of the hugest Incense Cedars (Calocedrus decurrens) any of us had ever seen – almost like Giant Sequoias.” And yet, reading back through these notes, at the risk of sounding melodramatic, there was an unsettled air connected to our journey, too. An ebullience mingled with foreboding.

This is because the very wildness of Marble Creek—its mix of enormous trees both burned and unburned, the sometimes-there trail, the immediate and unavoidable remoteness, the ominous scent of marijuana grow sites—inspired an odd mix of contemplation and silliness. It is a site where timelessness and fragility never quite reconcile. We go to places like Marble Creek and we follow trails that aren’t there that seem like they have no end for the sheer thrill of the unknown, for the good talk, for the zany exuberance and joy of it. In many ways they unmask us.

Marble Creek’s condition is a product of misunderstanding the role of fire in these forests. In the absence of fire, forest fuels became super-abundant, tree density increases by orders of magnitude, and ladder fuels create a continuous fuel source from ground to crown. Fire is an essential process that has been suppressed for over 100 years; now, it consumes all life. Forests and rivers were tended for countless generations by Maidu. As we find ourselves starting over post wildfire, we need to understand how to use fire to rebuild the structure and function of these ecosystems. Streams like Marble Creek, which flow in and out of public and private holdings, complicate effective management. Conditions on Marble Creek necessitate a better understanding of the relationship between tending and protecting the land.

In isolation these landscapes can be bullied, beleaguered: Marble Creek stands alone, surrounded by a matrix of roads, vulnerable to incursions of all kinds; it is our task to make connections among wild enclaves, for their own sake as well as for their ability to unite us. It seems sometimes that there can be no other places but these, like the wild canyon of Marble Creek, to expose us, to promote fellowship, to clarify the plain fact that the worthy cause of forest protection is also self-preservation.