Friends of Plumas Wilderness is dedicated to studying, exploring, and maintaining the integrity of natural ecosystems where the Sierra and the Cascades meet.

We bring diverse stakeholders—federal land managers, state and national conservation organizations, and local residents—to the table to defend existing environmental protections on public lands and advocate for the permanent protection of wild places. We use our passion and knowledge of the land to cultivate environmental awareness through education and hands-on stewardship work.

Advocate for our public lands – Feather Falls Needs You NOW!

Bald Rock Canyon is unquestionably the most dramatic terrain on the Plumas National Forest. In 1965, the Regional Forester recognized the scenic quality and recreational value of the area by designating the Feather Falls Scenic Area. The 11,000-acre Special Interest Area conserves portions of the lower Middle Fork Feather River watershed in Bald Rock Canyon, including Feather Falls on Fall River, Seven Falls on the South Branch, and the mouth of the Little North Fork. Over millennia, these rivers have carved through pure granite terrane to create the breathtaking views and scenic waterfalls we enjoy today. 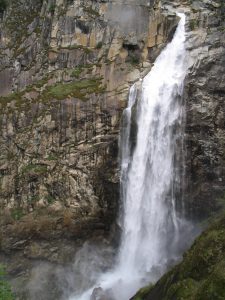 From the 1920s until the 1940s, Oroville community leaders advocated that the area be protected as a national park. Other Central Valley residents, however, had a different vision for the Middle Fork Feather River: in 1950, four small irrigation districts in Butte and Sutter counties proposed a series of dams and powerhouses along a 40-mile section of the river between Clio and the mouth of Bald Rock Canyon. Upon hearing of the proposed diversions, residents of Plumas County, supported by the Chamber of Commerce and Rotary, formed the Save the Middle Fork League. The Plumas County Board of Supervisors voted to provide funds for legal expenses. The Sierra Club and Trout Unlimited ultimately joined the fight. A series of heated public meetings led the irrigation districts to drop two of the proposed dams and powerhouses but two dams and two powerhouses were permitted by the State. Plumas County promptly filed suit to stop construction. Clearly, it takes a strong coalition to protect our wild lands and rivers.

Adventurers like Les Whitman, who attempted to raft and film the rugged river in 1962, and Dick Laursen, who photo-documented the entire length of the canyon in 1967, worked to inform the public about values of the river in its natural state. Eleven-term U.S. Congressional Representative Bizz Johnson made sure the river was one of only eight included with the passage of the Wild & Scenic Rivers Act of 1968. This Congressional action put an end to the dispute over the future of the Middle Fork and ended the twenty-plus year conservation battle.

Bald Rock Canyon received additional state and national protections. Further, in 1971 48 miles were designated between the Sloat Bridge and Lake Oroville as Wild Trout Waters. In 1978, the Feather Falls National Recreation Trail was designated, and in the 80s Fall River, the South Branch, and the Little North Fork were considered eligible for Wild & Scenic status.

The 1988 Plumas National Forest Plan established general directions, standards and guidelines for the management of the Feather Falls Special Interest Area. The Forest Plan recommended that the area be protected as a National Natural Landmark to conserve its outstanding biological and geological resources. National Natural Landmarks are designated by the Secretary of the Interior and the National Park System administers the program, working cooperatively with managers and partners to promote conservation and appreciation of our nation’s natural heritage. The Forest Plan also established the 5,200-acre Bald Rock Semi-Primitive Area. In 2000, the Forest Service identified the Bald Rock Inventoried Roadless Area. The majority of the Bald Rock IRA does not allow road construction or reconstruction. 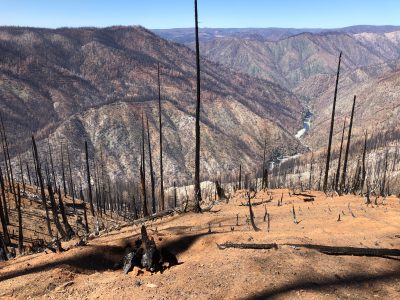 In 2020, the entire region burned at high severity with the 319,000-acre North Complex Fire. In early 2021, the Plumas National Forest proposed the Feather Falls Trailhead Salvage Project / Post-Fire Project. They plan to log 250 acres (2 million board feet of lumber) in and adjacent to the Feather Falls Scenic Area and the Bald Rock Inventoried Roadless Area. The primary values of the SIA as outlined in the Forest Plan are scenic and recreational (not timber). Guidelines for the management of timber in the Feather Falls SIA are: “Harvest timber only when the scenic quality can be maintained or improved, or to prevent diseases or insect epidemic”. 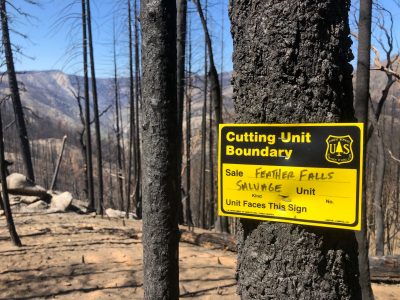 and recreational values of the Feather Falls Scenic Special Interest Area. Furthermore, tractor logging of the natural area will kill emerging tree seedlings and compact soils. Removal of the large snags, which provide shade for seedlings and slow conversion of the area into shrublands, will likely require that the Forest Service apply herbicides.

We need allies! It is high time to rekindle those partnerships of the past, when Chambers, Service Clubs, Conservationists, and local elected officials worked in concert for the common good of our communities and public lands. Comment today!

We advocate for the permanent protection of more wild lands and rivers where people and wildlife can find refuge. We use science to inform management decisions—we convene citizen scientists, collect data, and employ concepts from conservation biology and island biogeography to prioritize which areas we seek additional protections for. Sign the petition to protect our wild places >

Since 1974, we’ve been defending The Lost Sierra so that our untamed nature and remote places stay forever wild. Some of our accomplishments include:

We led the effort to permanently protect the Bucks Lake Wilderness.

Worked with a diverse group of stakeholders to form the Quincy Library Group where we worked to protect roadless areas and old-growth forests.

Developed the Skier Alternative for the Plumas National Forest Over-Snow Vehicle Use Designation Process. With support from Winter Wildlands Alliance, we produced Home: A Place Worth Protecting.

Partnered with The Wilderness Society and Cal Wild to prioritize eligible Wilderness Areas and Wild & Scenic Rivers on the Plumas National Forest. With support from Patagonia we produced Visions of the Lost Sierra.

Partnered with the Lassen National Forest, Sierra Forest Legacy, and other stakeholders to initiate planning to restore fire in the Ishi Wilderness.